As the Galactic Civil War dominates life in the galaxy, no one is safe. From civilians and common thieves to troopers and Jedi, protection and ingenuity are paramount to survival. In the quest for victory, every tool and weapon holds the potential to tip the scales in the war for the galaxy.

Fantasy Flight Games is proud to announce Gadgets and Gear, a 142-page essential collection of weapons and equipment for Star WarsRoleplaying!

With Gadgets and Gear, Game Masters and players have a huge selection of equipment right at their fingertips! This sourcebook gathers weapons, armor, attachments, and gear from all three Star Wars Roleplaying game lines including Edge of the Empire, Age of Rebellion, and Force and Destiny. It also adds new pieces of equipment, including weapons and armor used by heroic and villainous characters whose deeds are whispered about across the stars.

With hundreds of gadgets and gear catalogued in an easily readable new format, finding the perfect tool for the job has never been easier.

One of these legendary items is Luke Skywalker’s iconic green lightsaber, a beacon of hope in a galaxy ruled by the Empire. Though this isn’t an item you’re likely to stumble across, you never know when you may cross paths with the Jedi Master, especially since he is profiled in Allies and Adversaries! 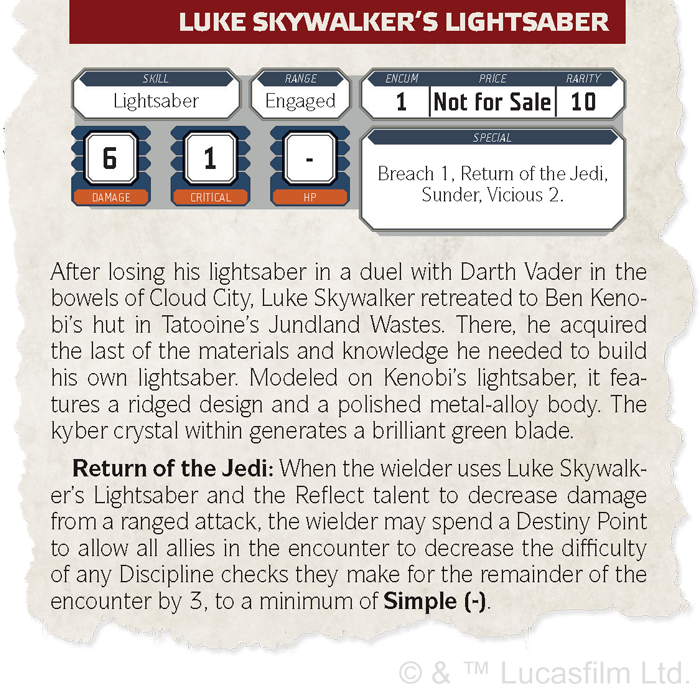 Luke Skywalker’s Lightsaber is fairly standard when it comes to its physical components, a low critical value ensures your enemies will receive long lasting damage, especially with the Vicious 2 trait. However, to the galaxy at large, the lightsaber represents so much more. The Return of the Jedi ability allows the wielder of the lightsaber to spend a destiny point after deflecting a ranged attack to make disciple checks easier for their allies for the remainder of the encounter, inspiring those around them with impressive skill.

But these iconic weapons are exceptionally rare, wielded by those who have already proven themselves in the galaxy. Player character’s will have to rely on their own gadgets and gear to survive the conflicts of the Star Warsgalaxy. Luckily, this sourcebook contains a wide swathe of options to prepare your character for the adventures ahead.

The soldiers fighting on the frontlines of war may be drawn to the wide variety of blasters throughout the galaxy. From the A280-CFE Convertible Heavy Blaster Pistol to the XL-2 “Flashfire” Light Blaster Pistol, over 60 ranged weapons are detailed in the book, making it the ideal place to find the perfect weapon to keep at your side in a pinch. 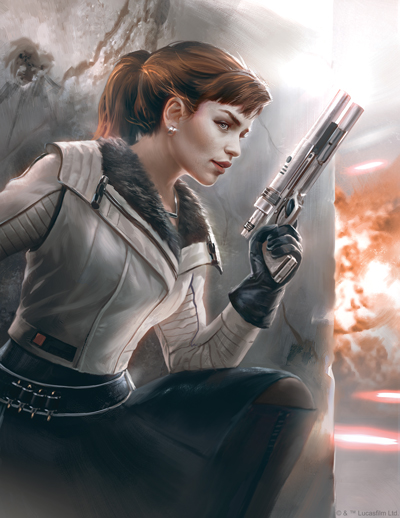 While blasters are by far the preferred ranged weaponry of the galaxy’s warriors, projectile armaments are still extremely common. Slugthrowers, the most common projectile weapons, are favored by smaller populations and those without access to blaster weaponry. Slugthrowers rely on chemical explosions to launch metal slugs at high speed toward targets. Flechette weaponry, which relies on sharp-edged debris, as well as dart shooters that impale targets and deliver a variety of toxins are also popular and Gadgets and Gear will guide you to 20 of these unique projectile weapons.

Those that find themselves on the edges of society, living in hives of scum and villainy on the Outer Rim might be drawn to more exotic weapons. Bounty Hunters often use weapons with Tractor Beam technology, and few have stared down the barrel of a custom Wookiee’s bowcaster and lived to tell the tale. These weapons are unorthodox, only found in certain regions of space, but that doesn’t make them any less effective than more traditional gadgets and gear. Over 20 of these weapons are featured in Gadgets and Gear, providing unique weapon options players may otherwise never consider.

Sentient beings have been fighting each other for survival, dominance, and pride in the Star Wars galaxy for millennia. While most now use high-tech weaponry to do so, many still resort to pummeling each other with whatever appendage is most handy. Brawling weapons range from classic knuckle-dusters to high-powered shock gloves, and they rarely require a user to learn new fighting techniques to wield them. Thirteen of these brawl weapons are detailed in Gadgets and Gear, for those who want fight up close and personal. 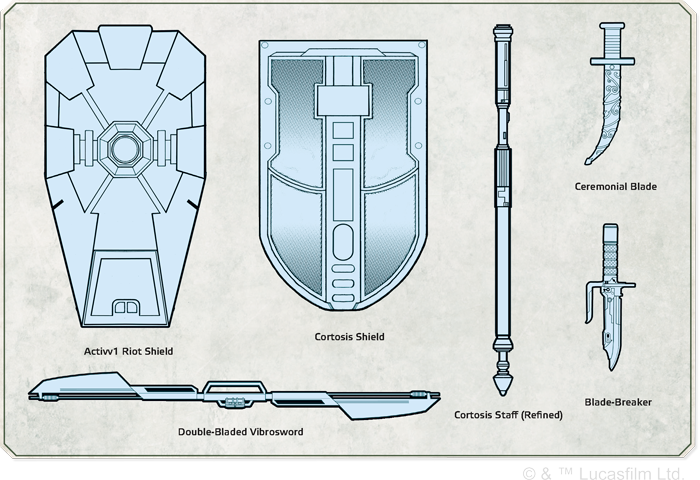 Unlike brawling weapons, melee and Lightsaber weapons require extensive training to use effectively. The designs vary from simple knives to longer polearms to the legendary lightsabers of the fabled Jedi Knights. Many of these weapons carry cultural significance and are used in traditional rituals or ceremonies. While generally considered inferior to ranged weaponry, melee weapons and lightsabers can be lethal if their wielders are able to close distance. Over 48 melee weapons are detailed in Gadgets and Gear. 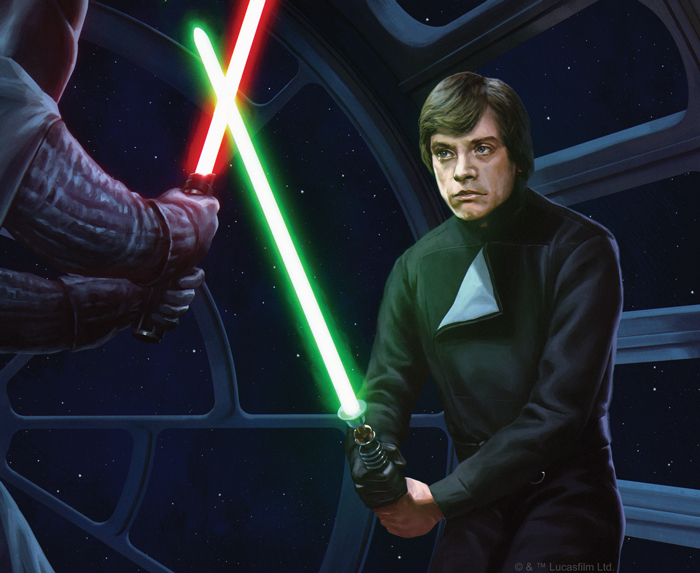 Explosives and ordnance, which range from hand grenades and shaped charges all the way up to portable rockets and missiles, dominate battlefields. Explosive technology is capable of delivering a variety of effects and can be surprisingly versatile. Still, most explosive ordnance is restricted primarily to military use throughout the Empire. The process to obtain a permit to use military explosives is arduous, and permits are generally limited to certain mercenaries, local defense forces, and bounty hunters. With Gadgets and Gear, you'll find over 40 ways to solve a problem with explosives.

Each of these weapons can be customized with attachments. Customizing weapons and armor with unique modifications has given smugglers, starship captains, and stormtroopers alike the ability to individualize themselves and, often, send a message to those who would challenge them. From customized blasters to personalized lightsabers, Gadgets and Gear includes over 120 attachment options for your character’s gear.

While all of these weapons can be deadly, the proper armor can protect the savviest of heroes. As quickly as new weapons are designed and employed on the battlefield, engineers are tasked with creating stronger, more versatile armor to combat climbing casualties. Whether the goal is to save lives or simply avoid the costs of training new soldiers, armor is a vital part of warfare. However, even in day-to-day life, anyone who gets involved in a heated disagreement might want to be wearing something sturdy to protect their vitals. Over 50 pieces of armor are catalogued in Gadgets and Gear, including the Mandalorian armor worn by the infamous bounty hunter Boba Fett, and the cold prison of metal and wires that keeps the notorious Darth Vader alive. 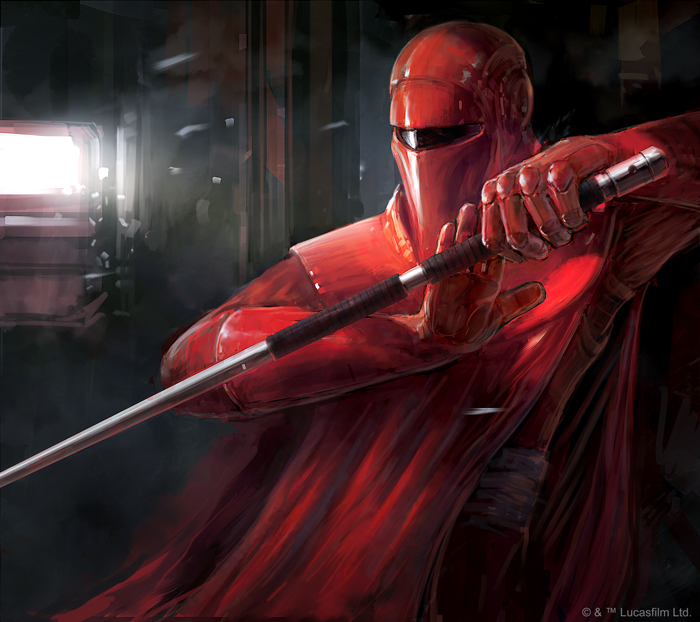 The final chapter of the book focuses on the broad topic of equipment. Strewn across the galaxy is a seemingly unlimited number of items that range from weird and silly to essential for surviving in the hostile environments that are found around every corner. From cybernetic augmentations and medical equipment to microdroid listeners and fusion cutters, the Star Wars universe is brimming with a plethora of tools and gadgets that are sure to bring every adventure to life. This catch-all chapter includes over 130 pieces of gear from across the galaxy to aid your heroes in their adventures.