For the Galactic Empire, conquering a planet is only the beginning of the battle. Massive vehicles like AT-STs and elite shock troops like Imperial Death Troopers may be effective at sweeping across battlefields and capturing new territory, but they rarely stick around to hold this ground. Soon, however, you’ll gain a powerful tool that can help quell any opposition that might rise against Imperial occupation.

Few symbols of Imperial occupation are more readily apparent than a TX-225 GAVw Occupier Combat Assault Tank. Heavily armed and capable of carrying either cargo or personnel, one of these tanks can be a versatile asset to stormtrooper detachments on occupation duty. With the TX-225 GAVw Occupier Combat Assault Tank Unit Expansion, you’ll find a single finely sculpted, menacing TX-225 miniature that can work in tandem with your ground troops to impose the Empire’s will wherever it’s been assigned. This beautiful miniature is accompanied by the full assortment of unit cards, upgrade cards, and tokens that you’ll need to add one to your armies. 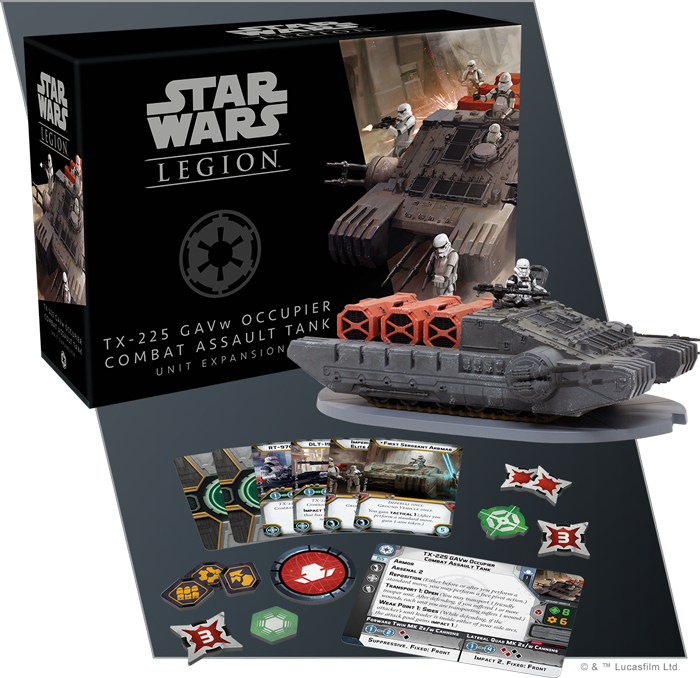 No matter how invincible your Imperial army may seem, you're sure to encounter resistance from those who refuse to enter the peace and stability of the Empire. As its name suggests, the TX-225 GAVw Occupier Combat Assault Tank is an essential part of these counterinsurgency operations, able to both lay down heavy fire and provide mobile cover for your troops. The second heavy unit for the Galactic Empire, the Occupier is a cheaper option than an AT-ST, with just as much destructive potential.

Although it doesn’t pack quite the punch of its counterpart, every TX-225 features two built-in weapons that are useful no matter what units it’s facing. Its Forward Twin MK 2e/w Cannons are perfect for pinning enemy units in place with suppressive fire. The Lateral Quad MK 2e/w Cannons, meanwhile, can deal some heavy damage—even against armored units. Better yet, both these weapons can be combined into the same attack pool with the Arsenal 2 keyword for a single deadly strike.

While these two weapons provide a powerful baseline, they only scratch the surface of the TX-225 GAVw Occupier’s potential as an attack platform. The Combat Assault Tank can be equipped with both a pilot and either a DLT-19 Rifle or a RT-97C Rifle at its hardpoint, giving you even more power over your loadout. No matter what weapon you decide on, your TX-225 GAVw Occupier Combat Assault Tank miniature can reflect your choice, allowing you to customize your mini with both weapons. The customization doesn't stop there, either. You can personalize your own TX-225 with a variety of options for how your gunner and pilots appear on the tank, as well as potentially loading up the cargo bed with three crates of kyber crystals.

Despite its ability to launch a concentrated assault on enemy units, the true strength of the TX-225 GAVw Occupier may be in its ability to work with ground troops. As a transport, the tank doesn't have to be hauling kyber crystals—it can also ferry troops into the heart of battle, all while providing a screen for any units that might be following close behind. At the same time that it’s providing cover for your corps units, those same units can screen the Combat Assault Tank from any enemies attempting to outflank its heavy frontal armor.